One Lesson From Sandy: Hurricanes Aren’t All Bad for Birds

Ten years after the storm devastated the East Coast, science shows its effects on avian habitat were a surprisingly mixed bag.

This story was originally published in Audubon on Oct. 28, 2022. You can see the original story here. 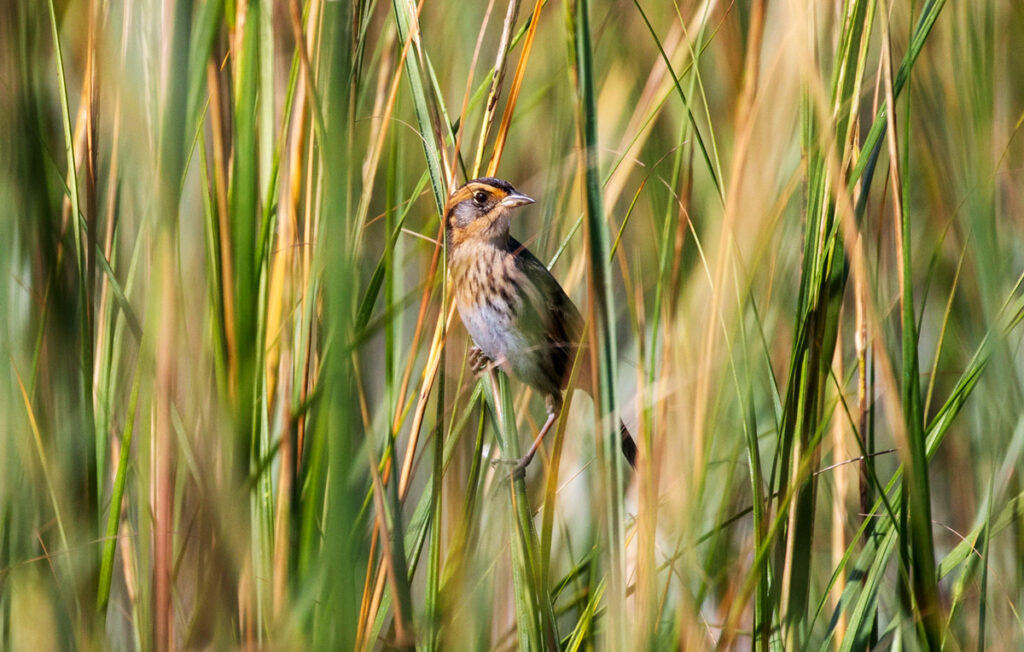 On October 29, 2012, after cutting a deadly and destructive path through the Caribbean, Hurricane Sandy made landfall in the United States near Atlantic City, New Jersey. The storm devastated communities in the Northeast, causing more than 100 deaths and an estimated $65 billion in damage. As it dissipated, leaving transformed coastal landscapes in its wake, biologists began investigating whether the hurricane had been equally calamitous for birds.

In the 10 years since Sandy, a complicated picture has emerged from those efforts. For some birds, the hurricane destroyed critical stopover habitat, imperiling already vulnerable populations and requiring rapid intervention. Others appeared to have been unaffected. Perhaps most surprising, Hurricane Sandy gave certain threatened shorebirds a needed boost, leaving behind beaches that were battered but exactly to their liking. Today scientists are using lessons learned from the storm to help make better conservation decisions.

A decade before Sandy, ecologist Chris Elphick, newly arrived at the University of Connecticut, began studying the Saltmarsh Sparrows in nearby tidal marshes. The secretive species builds nests directly above the typical high tide mark, where they’re vulnerable to flooding. Elphick and others wondered how rising seas threatened the birds.

It was a difficult question to answer at the time. Elphick had some historic data on the sparrows dating back to the 1990s, but they were patchy. The remote sensing technology then available wasn’t precise enough to measure the minute differences in elevation across marshes that could mean success or failure for the birds. “We just didn’t feel we had a good handle on how badly off the birds were,” Elphick says.

Elphick and his colleagues undertook a massive survey to find out, visiting more than 1,500 sites across 10 states to get a snapshot of birds and vegetation in tidal marshes throughout the Northeast. They also pieced together the historic data, so they could compare their results to previous decades. The team finished their first survey in 2012.

When Hurricane Sandy slammed the East Coast later that year with 80-mile-per-hour winds and a towering storm surge, Elphick’s team was perfectly positioned to measure its impact on Saltmarsh Sparrows. Their survey sites spanned from the Chesapeake Bay to near the Canadian border. “Sandy came right through the middle,” Elphick says.

If they didn’t have the historic beaches that they depended on in the spring, they wouldn’t be able to make their long migration.

—Danielle McCulloch, a biologist with the U.S. Fish and Wildlife Service (FWS)

In 2013 and 2014, Elphick’s team repeated the survey, returning to the same locations and again recording all the birds they observed. The storm hit the central sites with full force, but weakened to the north and south, creating a natural experiment that let researchers gauge the impact on sparrows.

“And what we found,” says Elphick, “was that we could basically not detect any effect of the storm.” Elphick wasn’t shocked that the hugely destructive storm had no measurable impact on the birds. “These animals and plants live with these events,” he says. “If they couldn’t live through them, then they wouldn’t be living in those places. They would’ve gone extinct.”

But that doesn’t mean the species is in the clear. Elphick’s team found that three-quarters of the world population of Saltmarsh Sparrows had disappeared—in the two decades before Hurricane Sandy. Driving that loss is long-term, incremental change to the tidal marshes they depend on. Much of that change is human-caused, including pollution, coastal development, and what Elphick sees as the biggest threat of all: sea-level rise.

Those shifts can make marshes more vulnerable to hurricanes, which are expected to intensify with climate change. Still, Elphick doesn’t see hurricanes becoming a major threat to Saltmarsh Sparrows compared to the gradual changes he’s worried about. “These big events that are dramatic, we pay a lot of attention to those,” says Elphick. “And the slow, creeping things that are going on in the background, we kind of don’t notice.”

Addressing the underlying threats means protecting tidal marshes on a large scale. Elphick is studying whether interventions like creating ideal microhabitats or managing flooding with tide gates can help Saltmarsh Sparrows in the short term. But ultimately, he says, saving the species will likely require letting marshes migrate inland as sea levels rise. 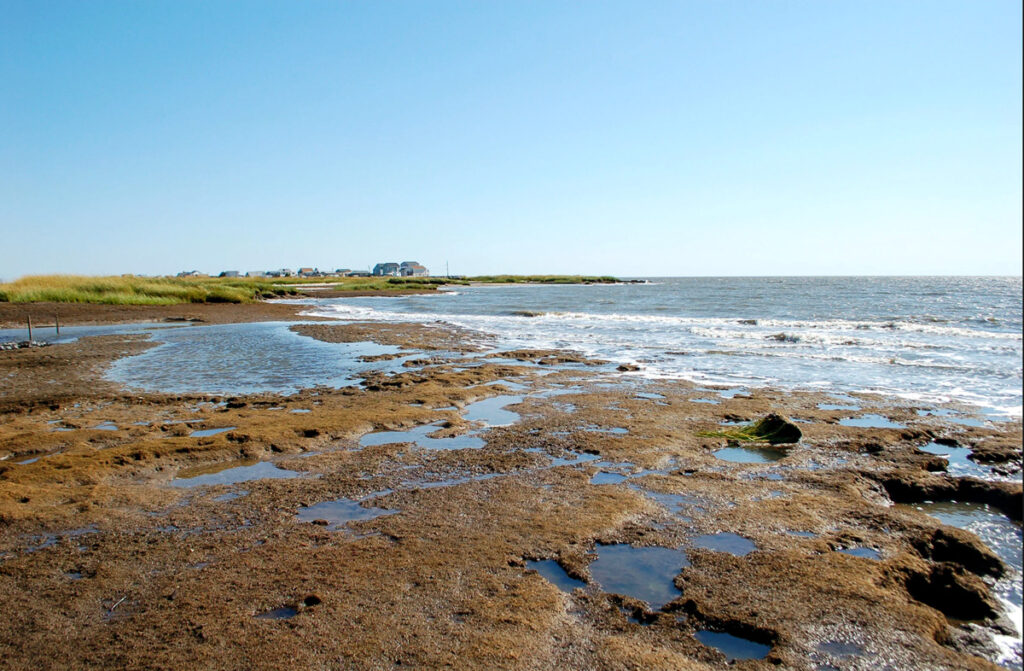 Storms may be a natural feature of coastal ecosystems, as Elphick notes, but if a species has a very small population or a limited range left to use, a direct hit by a hurricane could be disastrous. That was the fear in the Delaware Bay, where Sandy pummeled stopover grounds of Red Knots, a threatened sandpiper with one of the longest migrations in the animal kingdom.

The storm devastated much of the New Jersey shoreline around the bay, says Danielle McCulloch, a biologist with the U.S. Fish and Wildlife Service (FWS). “And when I say devastated, I mean swept away sand, ruined habitat,” McCulloch says.

The damage left beaches completely unsuitable for the horseshoe crabs that return each spring to spawn. Red Knots and other migrating birds arrive soon after and rely on horseshoe crab eggs for crucial nutrition on their journeys. McCulloch says the agency realized immediate action was needed to ensure the survival of the Red Knots. “If they didn’t have the historic beaches that they depended on in the spring, they wouldn’t be able to make their long migration,” she says.

The FWS quickly launched restoration projects in the bay, replacing sand and stabilizing beaches at key sites before the birds returned the next spring. It worked. When Hurricane Sandy hit, Red Knots were still recovering after unregulated commercial horseshoe crab harvesting in the 1990s brought their numbers to historic lows. The restored beaches provided the necessary habitat to avoid catastrophe and help Red Knots continue their rebound. Without that immediate recovery work, says McCulloch, “we could have lost a significant amount of that population.”

As in much of the Northeast, development around Delaware Bay limits habitat for birds and puts both humans and wildlife at risk from future storms. McCulloch says in the wake of Sandy, the FWS has focused on nature-based coastal protection in the region, from installing oyster reefs as living breakwaters to undertaking large-scale marsh restoration, which will preserve important ecosystems and safeguard human communities as well.

“We found out from Hurricane Sandy that marshes were our best protection against storms,” says McCulloch. “Nature is our best defense.”

Healthy marshes are impressively resilient to hurricanes. In another type of coastal habitat, Hurricane Sandy was a rejuvenating force, and a boon for the Piping Plover.

The tiny, threatened shorebird nests along much of the East Coast, including on the narrow barrier island south of Long Island, called Fire Island. In his years as park biologist at Fire Island National Seashore, Jordan Raphael saw their population go up and down—then mostly down. “The plovers weren’t really doing well at all,” Raphael says. “And then all of a sudden this storm comes in, and the ecosystem is completely recharged.”

Piping Plovers thrive in flat, sandy areas with little to no vegetation. That was exactly the habitat Hurricane Sandy created on Fire Island, where it washed out many of the park’s distinctive high dunes and pushed the sand into more suitable arrangements for the birds.

Much of the sand-shifting occurred in federally designated wilderness, a highly protected area kept largely untouched. Within that zone, there was little question park staff would leave the sand where the hurricane had deposited it, rather than reconstruct the less plover-friendly vegetated dunes, as many coastal communities rushed to do after Sandy. That excited conservationists like Jillian Liner, director of conservation at Audubon Vermont, who was with Audubon New York at the time. “It was awesome to have a place like Fire Island where they were going to let the natural processes happen,” Liner says.

The storm’s effect on plovers was dramatic. A few months before Sandy, park staff and volunteers counted 12 breeding pairs, which fledged just 15 chicks. After Sandy, the population continued declining for a few more years, bottoming out at just five chicks in 2015—Raphael says that’s a typical lag—and then shot up. Twenty-nine chicks fledged in 2018. This year, there were 101.

Piping Plovers will do all right with climate change and sea-level rise on Fire Island, says Mike Bilecki, the park’s chief of resources management. “Until, of course, the island is totally under water.” The park service doesn’t expect that to be anytime soon. Their models predict at least some of the island will make it to the next century. But other habitats, and other birds, don’t have that long.

The Saltmarsh Sparrows that Elphick studies, for example, are highly sensitive to small rises in sea level. Natural disasters like Hurricane Sandy rightfully command attention, but Elphick wants to see greater energy directed toward the slow-moving but relentless effects of climate change, which transform landscapes little by little. “That has huge consequences,” Elphick says, “Not just for these birds, but for us.”

Liner, too, sees a lesson for humans in the story of birds and Hurricane Sandy. She points to the Piping Plovers, which, over millennia, have evolved to live with storms and the changes they bring. “Being resilient doesn’t mean rebuilding back in the same way,” she says. “It’s about learning how to adapt.”