Study suggests kids exposed to the disaster while in the womb have higher risks for depression, anxiety and ADHD.

This story was originally published by The Guardian, via Nexus Media News, on Jan. 18, 2023. You can see the original story here. 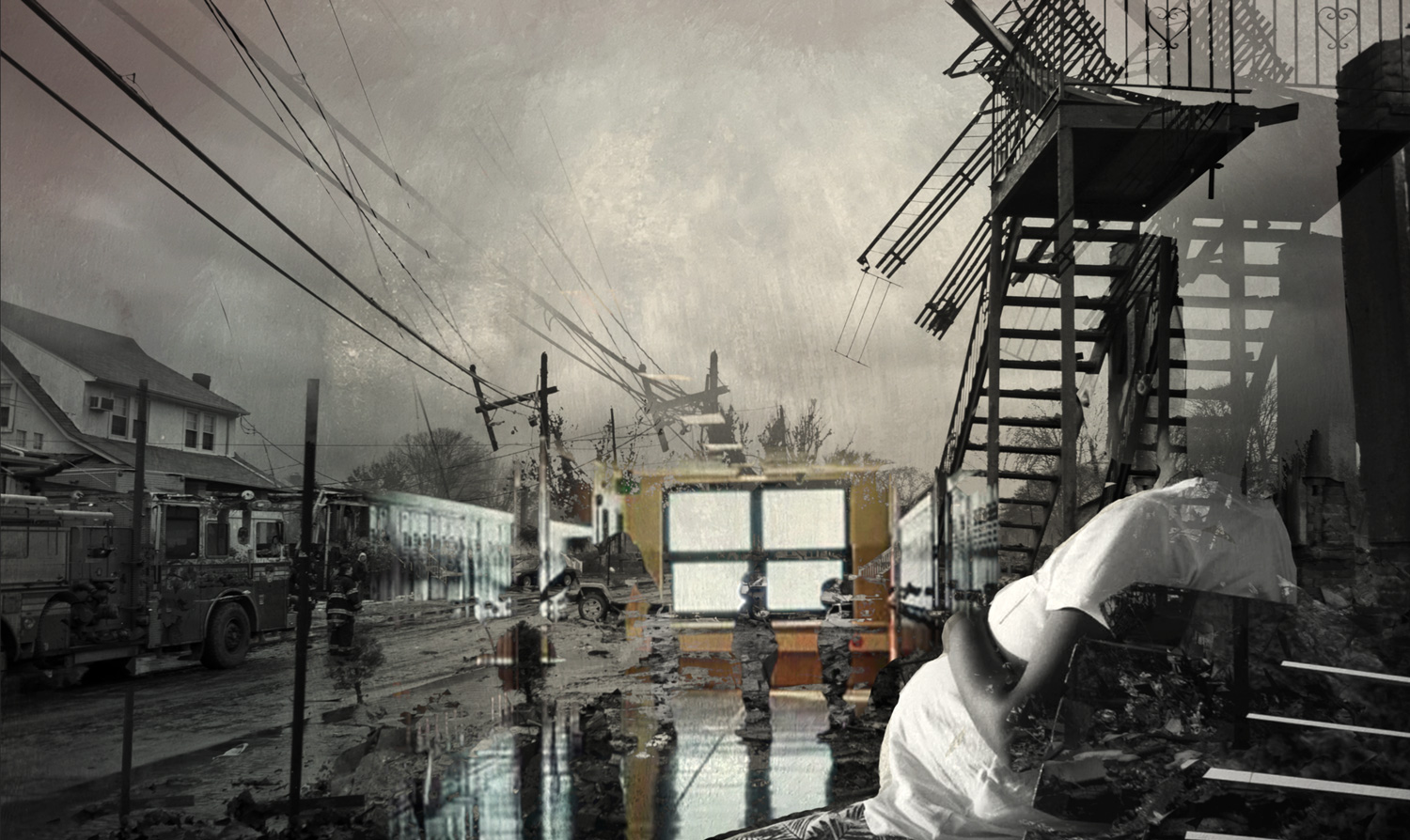 When Superstorm Sandy hit in October 2012, Celia Sporer-Newman was about eight months pregnant and working full-time as a paramedic in Queens, New York.

Sporer-Newman had worked through previous disasters, including Hurricane Irene the year before, but this felt different. She saw news reports that said Sandy was going to be worse than anything New Yorkers had seen before.

“What if I go into labor?” Sporer-Newman wondered. “I was like, [with] my luck, I’ll be at work in an ambulance standing in, like, 12 feet of water.”

Four days before Superstorm Sandy made landfall and about three weeks before her due date, Sporer-Newman gave birth to a baby boy named Izzy. He was seven pounds and six ounces and jaundiced but otherwise appeared healthy. But as the rain from Sandy began to come down, Sporer-Newman and her baby would face challenges beyond their expectations.

In the United States, hurricanes are increasing in frequency and intensity due to the climate crisis. Disasters cause obvious problems: People’s homes are damaged or destroyed; neighborhoods are flooded; businesses fail and workers lose jobs.

But a study released this fall suggests there might be other more insidious, long-term impacts. Children who were exposed to Superstorm Sandy while in the womb have “substantially” higher risks for developing depression, anxiety and attention deficit and disruptive behavior disorders, including ADHD.

The research, published in September in the Journal of Child Psychology and Psychiatry, surveyed 163 pre-school-age children and found that those exposed to Sandy in utero were more than twice as likely to be diagnosed with anxiety disorders and nearly four times as likely to be diagnosed for attention deficit and disruptive behavior disorders. The study also found a sex difference in diagnosis among girls and boys. Girls were more at risk of anxiety and depression, and boys were more at risk of ADHD. About 86% of the study’s participants were from racial and ethnic minorities and low-income backgrounds.

Dr. Yoko Nomura, the study’s lead author and a professor of psychology at City University of New York’s Queens College, said she did not anticipate the magnitude or consistency of these findings. “Superstorm Sandy turned out to be really a bad, bad guy,” she said.

Much has been said about how Sandy paralyzed New York City, resulting in at least 44 deaths and causing $19 billion dollars in damages. Healthcare providers in the city were hit especially hard. Flooding and storm damage caused six hospitals to close, leading to the evacuation of nearly 2,000 patients. The hospitals that remained open struggled to meet the needs of incoming patients.

All of a sudden expecting parents were forced to change their birth plans. One study participant reported having gotten stuck alone in an elevator; “[She was afraid she would] have a baby in the elevator without anybody’s help,” Nomura said.

When Sporer-Newman, who participated in the study, thinks back on Superstorm Sandy and Izzy’s birth, “All I could think about was how stressed I was,” she said.

Though Izzy was born a few days before the storm made landfall, researchers included him in the exposed group with kids of mothers that watched news reports of the storm. She went into labor ahead of her scheduled c-section and gave birth without an epidural — there was no time for one, she said. “I don’t know if the stress induced [labor] or…I had so many other things to do that I just wasn’t paying attention to my own body,” Sporer-Newman said.

Sporer-Newman wanted to get home before the storm struck and left the hospital with her son against medical advice. She said hospitals can get overwhelmed and didn’t want to risk an evacuation. She felt her chances of staying safe were better at home and, as a medical professional, she was able to monitor herself and her baby. She wasn’t able to take Izzy to both his check-ups at 7 days and then at 12-15 days owing to the city’s post-Sandy standstill. Her pediatrician’s office was closed and, when it did open, was overcrowded with patients.

At Izzy’s one-month visit, the doctor said that he was not gaining weight. He was taken to the emergency room, where he remained hospitalized for 10 days. He was diagnosed as ‘failure to thrive’, meaning his weight was below average, and he was not receiving the nutrition he needed to grow. But hospital staff couldn’t pinpoint exactly what was wrong. The baby cried and fussed a lot and, in retrospect, Sporer-Newman wonders if he was in pain. Eventually, doctors and his mother learned ways to help Izzy gain and maintain enough weight that allowed him to go home.

Sporer-Newman said if she had brought Izzy to his early doctor’s visits, then his struggle to gain weight would have been noticed and treated earlier. Now, she wonders if the unease around the storm affected the medical attention Izzy received. “He was born into a time of chaos. I’m not blaming anybody for missing things…but like, maybe he would’ve had a little bit more attention,” she said.

Jada Shapiro has been a doula for over twenty years in New York City. She said the emotional toll and the accompanying uncertainty from traumatic events like Sandy is profound on pregnant people. “I don’t think people totally understood that it was possible that a hospital would actually shut down or not function,” she said. “And when you don’t feel safe, labor doesn’t work as well.”

In the aftermath of Sandy, Shapiro helped to organize a program that matched parents displaced by the hurricane with volunteer doulas who offered support via phone and email until March 2013. “Doulas really make a big difference in terms of providing emotional support and physical support to laboring parents and to new parents,” she said.

Participants in Nomura’s study pointed to an array of stressors surrounding Sandy, Nomura said. Food pantries flooded. Widespread power outages affected phone and internet services, making it difficult to stay in touch with friends and family. Some participants took in extended family members whose homes were flooded or who lost electricity; that meant spending hours in tight corridors with several houseguests.

“All those things accumulate as a source of stress,” said Nomura.

One way that stress gets passed down to the child in utero is through the placenta, an organ that delivers nutrients and oxygen to a growing fetus, said Jia Liu, a neuroscientist and research professor with the Advanced Science Research Center at the CUNY Graduate Center. She worked with Nomura on a separate study, which used data from some of Nomura’s subjects, on how environmental stressors affect brain function. Its goal was to identify cellular and molecular changes that are related to a baby’s temperament early in life.

What if I go into labor? I was like, [with] my luck, I’ll be at work in an ambulance standing in, like, 12 feet of water.

Nomura and a team of researchers collected the placental tissues of all 33 participants who gave birth after the storm and followed their children from six to 12 months of age. The new parents were asked to fill out questionnaires to assess their baby’s temperament. The study found a significant association between a baby having a temperament described as “slow to warm up” with high stress levels during pregnancy.

Liu said researchers identified changes in two specific groups of genes expressed in the placenta. First, genes that regulate inflammation increased in number, which researchers believe was a response to stress in the womb. And second, genes that control how easily molecules (e.g. toxins, metabolites) cross from the mother to fetus via the placenta decreased in number. Both groups have a prominent impact on the fetus’s neurodevelopment.

And that affected infant behavior. Liu found that infants whose mothers had been highly stressed due to the storm were, on average, less active and had greater difficulty adjusting to new people and environments.

The results of that study were published by the Frontiers in Genetics this year.

Both studies are in line with existing research examining the impact of stress on the health of pregnant people and their children, said Garett Sansom, an environmental epidemiologist at Texas A&M University. But he cautioned against drawing too many conclusions from such relatively small studies.

“I think it’s a really good first step to behoove other researchers to begin to look at this more,” he said, adding that he would have wanted to know more about the experiences of the families before Sandy that might have contributed to the results, including access to care or any other environmental justice issues in local communities that worsen public health.

As natural disaster events become more common, Sansom said he expects there will be ample opportunity to broaden this field of research. “I think this is something that’s going to be of growing concern in the years and decades to come,” he said.

She said his personality is different from her other three boys. He will run a block ahead of the family on walks and they will stroll behind, struggling to keep up with him.

Sporer-Newman said she plans to have Izzy tested for ADHD. Such a diagnosis could be an opportunity for early intervention, said Nomura, who led the study published in September. It would help him access certain accommodations, like a quiet room without distractions to take tests, that might help him in school.

“In all of his jittery movements, inability to sit still, brilliant mind. We love him. All of our kids are different. We love them each for what they are,” said Sporer-Newman.